One of Lemmygrad’s original admins

May the sea bless you, and may Marxism-Leninism guide you.

LG admin here to say patriotism for countries like Palestine, Afghanistan, Vietnam, etc. is acceptable as they were colonized by invaders and “patriotism” for those countries is solidarity with indigenous and local populations and their ways of life, however patriotism for countries like the US, the UK, most of Europe, ETC is not and can not be acceptable, because to be “patriotic” for them you must accept the rape, murder, and theft of the indigenous populations they invaded.

Until the US comes under a red banner, American Patriotism will only stand as an acceptance of the manifest destiny pillaging of Natives, the Jim Crow laws that still in certain ways exist today, the recent overturning of Abortion, etc. Marxism and patriotism for the US are like oil and water, and those who try to mix the two have no business here.

link
fedilink
Dr. Daniel JacksontoCommunism@lemmygrad.ml•Why do we need to subscribe to a community to post?
link
fedilink
5•4M

i’m not sure if there’s a reason for it, other than spam mitigation. But it’s really not that big a deal overall that our subscription gate exists imo, it doesn’t keep people from posting and subscribing is as easy as clicking the button.

It’s more than a place for shitposts and haha’s, but a place to organize in the real world and be a repository of information and discussion that any Marxist could benefit from. If there’s any one thing I wish newcomers would understand before coming here, it’s that.

Zelensky is defending his nation against fascists… by accepting funding from an Israeli businessman for the Azov Battalion. Yeah, okay.

everything you’ve asked for exists.

But there’s also Meta, Finding Communities, and the moderation community exists somewhere on Lemmy (I’m not going searching for it)

link
fedilink
Dr. Daniel JacksontoCommunism@lemmygrad.ml•One of the tanks had the USSR flag on them(Screenshotted from a live-cam)
link
fedilink
6•5M

I’m fairly sure it’s a t72, tho. So for all I know, this could be Ukrainian. This is a situation of both sides of a conflict using either the same or similar equipment, so it’s really hard to identify stuff sometimes.

link
fedilink
Dr. Daniel JacksontoCommunism@lemmygrad.ml•One of the tanks had the USSR flag on them(Screenshotted from a live-cam)
link
fedilink
9•5M

I wonder if it’s owned/operated by one of the republics, since they have a decent population of Leninists. Though, I wouldn’t hold it against Russian tankers who have a positive view of the USSR to do this, or for Russian tankers who disagree with Putin’s anti-bolshevik stance to do this in protest.

link
fedilink
Dr. Daniel JacksontoCommunism@lemmygrad.ml•What are you all reading in terms of fiction? (not theory or history or politics; we already do plenty of that lmao)
link
fedilink
11•5M

I kid, I’ve been rereading some of the star wars comics lately.

The group that opposes NATO the most in the west tends to be counter-culture far-leftists, it’s only natural that a decaying empire would act against the elements of their opposition that are the easiest targets.

It’s really hard to say, and for us armchair military theorists it’s also kinda pointless to spend the mental energy to try to put together all of the pieces to come up with a definitive answer. But with any complex situation that has valid arguments from both sides, we should examine both major arguments.

Firstly, the argument that is positive for NATO’s goals. Mind you, that’s not necessarily pro-NATO, but rather just acknowledges that it may be exactly what NATO wanted. This argument being that NATO counted on the war in Ukraine to happen (and if not in Ukraine, then in any of the countries they’ve been operating in, like Latvia or Georgia for instance.) and wanted to use it to drive a secondary goal. That goal could be resource acquisition, propaganda, you name it. This argument pivots around the idea that NATO could manipulate the war so they benefit from it, regardless of the outcome of the war. If my assessment is correct, then I’d assume they’re leaning more towards the propaganda end of that spectrum. I.E. by getting Russia to invade Ukraine, they can use it to inspire a new age of pro-western fascism and cripple the leftist movements in NATO’s member countries. That can be used to justify military spending, for instance. Or to justify the signing of laws that remove freedoms from some or all of the nation’s population (such as the call to put Russians in internment camps and seize all of their property and wealth.)

Secondly, the argument that is negative for NATO’s aims. They planned for something that didn’t happen, or didn’t happen the way they wanted, and are floundering to pick up the pieces. This argument being that, either for the acquisition of resources, political power, whatever, NATO continued pushing for expansion into Russia’s sphere of influence against the objections of Russia, and it blew up in their face in a way they weren’t ready for. Maybe they expected a war to happen in Ukraine eventually, but didn’t expect it yet, and got caught with their pants down and weren’t ready to do what they were initially planning. If this is the case, then yes, it would just be the actions of a multinational empire in decline that will only suffer from it. We’ve already seen that their aggressive expansion has resulted in Russia and China growing closer, and I believe as the situation progresses, we’ll see the rest of the imperialized world grow closer with the two too (and further from NATO).

I believe it might’ve been a lil column A, a lil column B. They didn’t expect the war so soon and they’ve lost certain things from it, notably hegemony. But they’ve gained a source of propaganda that’s powerful enough to make liberals support politics they’ve claimed to oppose, and move NATO’s member states closer to nationalistic fascism, thus making a lot of rich people even richer, and the small group of people in the member states who hold the power even more powerful.

I mean, it’s an anti-communist docuseries that plays the horseshoe theory game really hard, and considers any leader who isn’t a western liberal one a “tyrant”… so, ya know, probably not the thing to share on lemmygrad?

link
fedilink
Dr. Daniel JacksontoCommunism@lemmygrad.ml•To show you lemmygrad does not censor, here is a recipe for a Molotov Cocktail
link
fedilink
4•5M

I’ve off and on considered writing out a detailed guide for building IEDs on /c/military for a hot second. Don’t think I’m gonna do it, don’t want the possible FBI heat for it, but we wouldn’t censor it if someone did post something like that.

Plato’s cave is the philosophical allegory asserted by Plato, wherein people within a cave with no experiences exterior to the cave are shown shadows on the wall. The allegory assumes that because the inhabitants are only familiar with the shadows on the wall, their frame of reality is integrally bound to those shadows. I.E. their only understanding of the world, is their understanding of shadows. 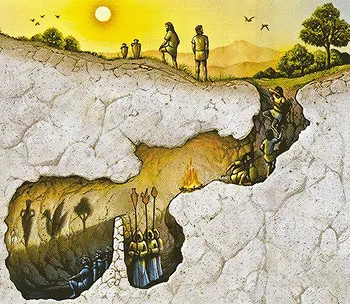 The only thing I can assume at, because I’ve not seen any claims of this on any other media source - especially not unbiased non-western ones - is this could be an example of media’s “Plato’s cave”. Wherein they know the people in the cave (in this sense, normal westerners who get the majority of their news from western outlets and rarely go source hunting) only see what they want them to see, and so they’re manipulating the shadows (in this case, the media itself. they’re doing this rn with the nuclear deterrent force, too) for the best outcome for themselves.

This specific one feels like a rehash of cold war era “socialism is when the people at the top take everything from the people at the bottom” rhetoric, but posed at Putin’s government. Which makes total sense to me, at least that they’d be using these arguments, I’ve seen a large amount of “Putin wants to resurrect the USSR” rhetoric from them too.

the situation escalated so quickly that I don’t feel like I was wrong perse. I was working off of the public information available at the time, and based on that it seemed very unlikely Russia would take military actions against Ukraine.

I assumed that if the situation came to actual war, it would have been NATO who started it. We can debate until we’re blue in the face over who really started this. Was it Ukraine for attacking Donbas, or was it Russia for retaliating? Ultimately the answer to that doesn’t matter, and we won’t have a concise narrative on it for a long time. But, I will continue to critically support Russia against NATO until something gives me a damn good reason to stop.

On this situation, I’d much rather support Russia and possibly be proven wrong in the future, than support Ukraine knowing that their government is full of Neo-Nazis and is being propped up by NATO.

My head’s been filled with far too many thoughts to really have anything fully coherent, i’m not shocked or surprised, but this has developed while I was sleeping and it’s going to take a while to process.

Currently, I’m unsure if NATO is going to get directly involved in the conflict just yet, or if they’re either going to chicken out and let Russia do what they’ll do, or get into the conflict in a few weeks or months. All I’ve seen so far is that the UK and the US are going to push stronger sanctions, so I guess it’s still in the air if they’re going to consolidate this into the largest war of our lifetime or not.

But, for now, I’m just watching and waiting for more information from trustworthy sources. Only time will tell how justified any of our positions are, or how important his event is. So, it’s time to just sit back, put on some music, and wait.

“left unity” has been a white moderate scourge on the left. Though the intentions were noble, it’s an idealistic fantasy that’s simply impossible.

You can’t have fire and water existing in the same place, one of them is going to overcome the other. When two things are diametrically opposed, only a fool would believe they can coexist.

link
fedilink
Dr. Daniel JacksontoCommunism@lemmygrad.ml•Those of you who live in the West, do you want to or have attempted to move to a socialist country?
link
fedilink
6•7M

I don’t actually know, I wanted to try to become a farmhand or something on a tea plantation, but I didn’t really look closely at employment options.